Missed Zoot’s recent appearance at the Hell Dorado club in Spain? Worry not. These video clips should give you a taste of what was going down that night.

Zoot Money at the Bull’s Head 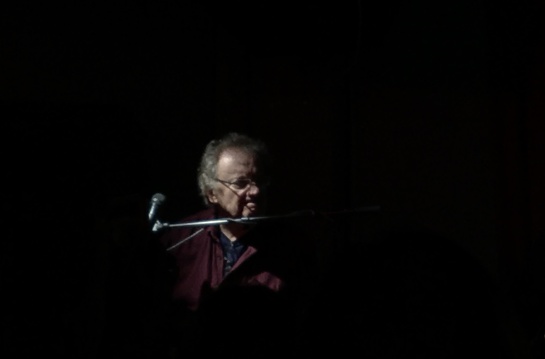 This being Christmas week, Zoot Money needed to call up some deps for last night’s gig at the Bull’s Head in Barnes. A whole band of deps, in fact. But what deps they were. The great Jim Mullen on guitar. John Altman and Bob Sydor on soprano and tenor saxophones respectively. Kenny Wilson on bass guitar and Mark Fletcher on drums. All they were getting, as one of them said, was a key and a count-in. And away they went.

It was rough around the edges, gorgeous in spots, and suffused throughout by the spirit of the music they share. “The Promised Land”. “One Scotch, One Bourbon, One Beer”. “My Babe”. “Let the Good Times Roll”. Eight-bar blues, 12-bar blues, 16-bar blues. Zoot toggled between B3, Rhodes and acoustic piano sounds on his electronic keyboards.

The highlights included two duets at the start of the second set: Mullen with Zoot on a lovely “Please Stay” and Sydor doing the Fathead Newman thing on Ray Charles’s “Hard Times”. The pianist Kenny Clayton and his daughter, the singer Alex Clayton-Black, were invited up for a guest spot which included a delightful “You’d Be So Nice to Come Home to”,

with a sinuous obligato from Altman’s curved soprano.

Cues were hit, cues were missed, but a good time rolled for the musicians and their audience in the little back room. That’s what the common language can do.

…unless you were there of course, in which case here’s a chance to re-experience a couple of highlights.

Zoot Money’s Big Roll Band and guests are on again at the Bull’s Head, Barnes just after Christmas.

As the year draws to a close, is your strength fading so fast that a big scroll down the Gigs page past almost all the good times of  2019 is a bit much and you need a wee sit-down afterwards? Never fear – help is here!

For the rest of December you can get a SNEAK PREVIEW of next year’s gigs page here. Now you can conserve your energy and have all the more get-up-and-go to enjoy swinging into the new decade. We’ll be there – will you? Get those dates in the diary now.

It’s beginning to look like The Great Escape From Turkey Sandwiches! Book early to avoid disappointment. With swinging shenanigans providing the perfect antidote to Christmas leftovers, this alternative celebration is an annual institution at the Bull’s Head in Barnes. In fact you’d be have to be crazy to miss it.

To get your juices flowing, here’s a free taste of November’s show, featuring the usual world class talent. Don’t say we’re not good to you.

Two more mainland European dates coming up, a week apart, with a dash back to Blighty in between. Sat Nov 23 it’s off to Sunny Spain to guest with the Pasapogas Hammond Quartet at the deliciously named Hell Dorado club. Then  it’s London for our regular shenanigans at the Bull’s Head, Barnes on Thur 28, followed by a date in Salzburg, Austria, for “The Big Boogie” with Pete York, Christoph Steinbach, Myra Maud and friends at the Kongresshaus in St Johann im Pongau on Sat 30.
Check the Gigs Page for ticket links but hurry, they are selling fast!
Hasta la wiedersehn, baby!

Nobody expects the Spanish Imposition!

You’re never too old to make a début! Some things are worth waiting for, and Zoot’s appearance with the Big Roll Band at the legendary Eel Pie Blues Club aka the Cabbage Patch last night was one of those occasions. A happy audience and a happy band. Maximum grooviness experienced by all present. Many thanks to all involved.

Photo – Gina Way. Click through for more pics and a video clip.

Thank you to Todd Sharpville for getting me together with him, Nic France (drums) and Mo Pleasure (bass) at the 606 Jazz Club in Chelsea the other night.